Hammargren & Meyer, P.A. (1996-2015).    The place where I practiced with fervor, grace,  and devotion for many years.   And then one day the doors  simply closed.   Forever.  Now only ghosts pass through these once bustling and even hallowed halls.  I know.  I was the last one to turn out the lights.  I saw myself hovering there as I turned to leave for the last time.  In mid air.  That’s me. 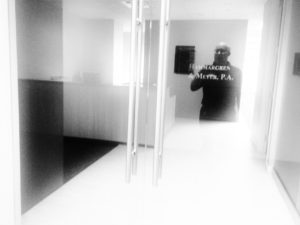 Fine lawyers. Solid paralegals.  Top shelf staff.  Great people all.  Some say that change is good and that nothing lasts forever.  The love of my life, Miss Linda, once softly spoke these words to me. Words that will forever ring true in so many walks of our lives.  “How so lucky we  are to have had something that makes saying goodbye so hard.”   Good luck folks.  Keep in touch.   RIP H&M.

Hi folks.  Welcome to Cook Law & ADR, PLLC.    We are still in the process of unpacking boxes, learning the phones, ironing out the technology bugs, setting up the website, and hanging near anything but certificates, licenses, and dipolmas on our walls.   It has been a rat race and a whirlwind for the last five hundred and sixty days or so.  It’s a long story that might someday be told.  Of course, it’s no longer important to the tasks at hand.  At Cook Law & ADR, the future is bright,  the coffee is fresh, the lawyering is solid,  and our  goodwill runs deep.  We’ll focus on your legal matters and keep you well  apprised.     If we can’t help you, we’ll help you find someone who maybe can.  No promises, other than a commitment to do our best with your  facts.    No bullshit, at least not extraordinarily so.   The law is tough.  Find someone whom you can trust.

This is our very first blog post. It  is made, first, to thank those who are with us and to welcome those who will soon be with us.  Frankly, it  is also made, mostly,  to see if this blogging link works.  Building a website is tough without the weight of a big marketing department behind building a  brand.

Hey, it’s a Friday night!  Leave your legal woes on the floor or at the door for the weekend.  Life is short.  Go dancing.  Or out  to a high school football game. LIsten to the band.   Get some exercise.  And oh yes,  hold your loved ones close. Real close.  We never know what tomorrow might bring.  We know this always and especially tonight, what with  the tragic news  out of  Greenwood.

How many times have I sat in mediation and heard these words that come from frustration, anger, and sometimes outright blindness to the oncoming broadside hit barreling  straight down the old turnpike?    “Sir,thank you for your effort but  I will much rather pay my lawyer a dollar before I will even consider paying my unworthy opponent one thin dime!  Tell him that I  shall see him in court!”    Hey, there is nothing wrong with standing on principle, at least  where and when principle can be found.  It’s one of the things that make this country great.  Principle.

Free will.  Free enterprise.  The American justice system.  The right to have our grievances aired in front of a jury of our peers.   Okay.   we  get this.  It’s all true.   However, is it really the best thing for you?   Probably not.   Having practiced for thirty years,  I’ve seen more than a few snit shows.   I’ve even been in the center of  one or two of them  myself.  There are not many things in litigation that hold true.  Here are two.  Most often, with all things considered, only bad things happen in court.  And, of course, the only sure winners in court are the lawyers and the experts.   We generally get paid win, lose, or draw.

As the  jury handed down its guilty verdict to the criminal defendant who had turned down a decent plea bargain before trial because he badly wanted  his day in court, the man turned to his lawyer and asked, earnestly.   “Well, that was wrong.  They just didn’t get it. So, where do we go from here?”   His lawyer, packing up her briefcase, looked at him and  responded quite matter-of-factly.   “Well, I am pretty sure that I am going home to have dinner with my husband and my children and you, sir, are going to jail.  You should have taken the deal.  You could be going home too.  We’ll talk later.”

It’s a helpless feeling, yes it is.  Going to jail that is.  Thank God you are likely dealing mostly, if not only, with money.   Helplessly throwing increasingly big dollars at a case that you  might just not win.  Remember, there are at least two sides to every story and the only “truth” that ultimately matters is the one handed down by your judge or your jury.  About  that jury of  peers that you want so badly?  Well, they probably will not  look, walk, or talk like you, and they just  might not  much like you or your story. ‘Tis true.   Be careful for what you wish. Bad things might be coming your way if you do not get your case settled today.

So, do not  be so bold to declare that you would  rather pay your lawyer a dollar before you will pay a dime, or maybe a good number of dimes, to bury your grievances  at mediation.   You are a smart person.   You are successful.   You have better things to do with your time and money than to throw them down the courthouse trough.   Come to mediation.   Control your deal.  Sure, it  will aggravate the heck out of you for a few days.   But then you will be done.  Resolution is always a good thing.   There can be no argument with resolution.  So ends today’s lesson on just a few of the many benefits of ADR.